Although the current castle only dates back to 1836, there have been defensive structures guarding Inverness for hundreds of years. It is believed a fortification existed when St Columba visited the Pictish King Brude (also known as king Bridei) in the 6th Century. The site of this structure isn’t known so may not have been precisely where the current castle stands.

Legend has it that in 1040 Macbeth murdered King Duncan at a castle on Auld Castlehill (which lies to the south of the current Inverness city). Following the death of King Duncan Macbeth assumed the role of King of Alba.

Macbeth ruled in mostly peaceful times, but in 1054 he faced an English invasion. After several years of conflict, Macbeth was killed in battle in 1057 by forces loyal to the future Malcolm III.

When Macbeth was succeeded by Malcolm III the new King built the first fortification that we can definitely say was on the site of the current castle.

This original fortification was most likely built from earth and timber. It probably remained this way until it was substantially rebuilt in stone by David I (1124-53). It was also at this time that he made Inverness a Royal Burgh.

The next major upgrades to the castle were made in 1263 in anticipation of a potential Norwegian invasion. In reality, Inverness was not attacked at this time.

In 1294 King Edward I of England demanded that Scottish troops should support his war against France. King John Balliol of Scotland not only refused to provide troops but also formalised a mutual defence agreement with Philip IV of France against England.

In response, on 30 March 1296, Edward sacked Berwick-upon-Tweed and after several more skirmishes, the Scottish army was defeated at the Battle of Dunbar on 27 April 1296. Following this defeat, an English garrison was briefly present at Inverness Castle.

Robert the Bruce and Inverness Castle

Although the castle was soon back in Scottish control, English troops once again took the castle in 1303. However, the Scottish were not to be beaten and in 1308 Robert I (the Bruce) retook the castle and partially destroyed it to prevent any further military use.

Lord of the Isles

In 1410 Inverness was attacked by Donald, Lord of the Isles. This attack demonstrated the need for the castle to be rebuilt which was done in 1412.

In 1428 James I came to the new Inverness castle to stamp his authority on his northern subjects, in particular, Alexander MacDonald, Lord of the Isles. James summoned Alexander to the castle and promptly arrested and imprisoned him along with numerous other Lords. Alexander was eventually released and in 1429 he returned to Inverness with a large force and burnt the town to the ground.

Alexander submitted to James in August 1429 and was imprisoned in Tantallon Castle. His successor, John MacDonald of Islay, continued to have a troublesome relationship with the monarchy and Inverness Castle was attacked by his forces in 1455, 1462 and 1491. On each occasion, the occupation was short-lived and resulted in many upgrades to strengthen its defenses. The threat effectively came to an end in 1493 with James IV having successfully broken the power of the MacDonalds.

By 1548 another castle was built on the site and this included a tower.

Mary Queen of Scots arrived in Inverness on 9 September 1562 only to find the castle gates shut in her face by Alexander Gordon upon the orders of George Gordon, 4th Earl of Huntly. Incensed by this the castle was subsequently besieged by supporters of the Queen. The siege lasted 3 days and when the castle fell, Alexander Gordon was hanged for treason and his head displayed on the castle.

The Queen subsequently spent 4 nights at Inverness Castle before moving on to Spynie Palace.

The Wars of the Three Kingdoms

Inverness Castle saw several actions during the Wars of the Three Kingdoms. In 1644 it was occupied by Covenanter troops tasked with defending the area against the Royalists. Despite determined attempts by the Royalists, Inverness held firm.

The execution of Charles I in January 1649 prompted a new round of hostilities. Royalist forces representing Prince Charles (Charles II) seized Inverness Castle in February 1649 but they withdrew as a Covenanter army approached. The following year the Royalists returned to Scotland and besieged Inverness Castle. The fortification held firm and the attack was resisted.

Prince Charles Stuart (Bonnie Prince Charlie) landed at Eriskay in the Outer Hebrides in July 1745 and managed to raise an army. By November 1745 he had begun an invasion of England and by December his forces had pushed as far south as Derby.

Arguably the Prince could have pushed onto London, but in a fateful decision, they retreated back to the Scottish Highlands to dislodge the Governmental garrisons along the Great Glen.

Following determined attacks by The Jacobites, Fort George (formerly Inverness Castle) was quickly captured, as was Fort Augustus at the southwestern tip of Loch Ness. These victories gave the Jacobites firm control of the Highlands. The Jacobites spent the winter in Inverness and prepared for the resumption of hostilities in the spring. In 1746, the Jacobites left from Fort George (Inverness Castle) but fearing it could fall into Government hands they set off numerous explosions around the site causing extensive damage. The rebellion came to an abrupt end in April 1746 following the defeat of the Jacobites at the Battle of Culloden.

The British military was concerned with how easily the Jacobites had been able to take Inverness Castle in 1745. Rather than rebuilding the castle, they elected to build a new facility that is the Fort George we know today. Situated eleven miles east of Inverness this was a state-of-the-art structure that dominated the Moray Firth.

The original Inverness Castle remained in poor condition until the mid-nineteenth century when it was rebuilt to house the Sheriff Courthouse and County Hall. Work on the restoration started in 1836 and what you see today is largely from this work.

The Castle Today & Beyond

The castle continues to be used as a court to this day, and as such, there is limited tourist access to the interior. However, in April 2017 the north tower of the castle was opened as the Castle Viewpoint offering spectacular 360-degree views of the City and surrounding countryside.

As well as the viewing tower, there is an exhibition which includes narrated drone footage that highlights some of the key locations that can be spotted from the tower.

As you climb the tower, other exhibitions will introduce you to some of the intriguing myths and legends associated with the City.  Discover the tale of the Brahan Seer, the legendary 17th-century Highland mystic who made predictions that came true, and learn how St Columba met and banished a monster from the River Ness, could this have been the first sighting of Nessie, the Loch Ness Monster?

On reaching the summit of the tower you can take in spectacular views across the city beyond.

Although the Castle is currently still used as a courthouse, there are plans to relocate these services thus freeing up the Castle as a visitor attraction. 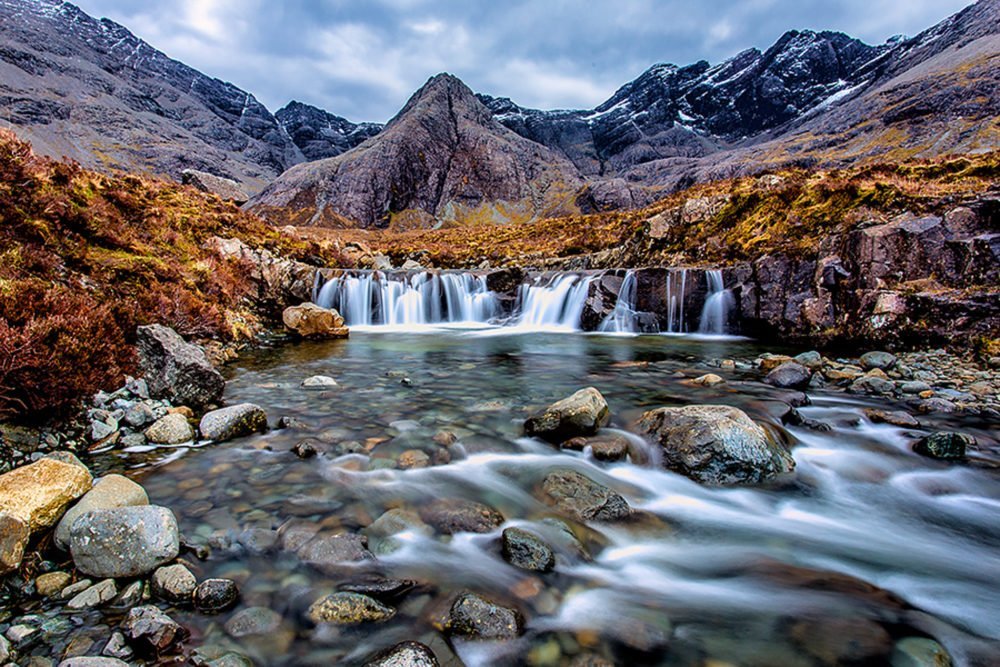 The Fairy Pools and The Quiraing, Isle of Skye