No!, we don’t mean Inverness on a Friday night (although that can be pretty wild – in a good way), but rather the furry and feathered varieties. So if you are staying at Inverglen Guest House here are a few suggestions as to where you can see some of our wonderful wildlife:

Deer are well distributed throughout the Scottish Highlands and here in Inverness and Loch Ness you often get the chance to see them up close. In summer the deer are often out of sight at the tops of hills and in remote glens, but in winter they come very close to the roads and houses in search of food and you stand a good chance of seeing them. One of the best places to see deer is South Loch Ness, especially around Loch Tarff. Just ask John at the B&B and he’ll make sure you know where to go. Remember, these are cautious and shy animals, so if you see them stay still and enjoy an amazing wildlife encounter…

Now Santa may have reindeer at Christmas, but in the Scottish Highlands at The Cairngorms National Park, there is a resident herd of semi-wild reindeer.

Approximately 150 animals make up this free-ranging herd and you there are regular guided trips to see them all year round (apart from January/February).

You can find out more about these fantastic creatures at http://www.cairngormreindeer.co.uk/

The Moray Firth is home to a resident population of Bottlenose Dolphins, and these waters offer some of the UK’s best opportunities to see these magnificent and intelligent creatures.

Of course, dolphins are wild creatures and there can be no guarantee of success in seeing them. However, with a little knowledge, you can certainly increase your chances.

The best spot for seeing dolphins is probably Chanonry Point, which is on the Black Isle near Fortrose and an easy journey from Inverness. Chanonry Point is a hot spot for sightings because it’s a favourite spot for dolphins to find food due to its geographical features. There is a natural “pinch-point” in the firth which forces fish into a smaller area, and when combined with low tide (and especially for an hour or so after the lowest point) this provides the perfect conditions for dolphins to catch their prey.

Apart from Chanonry Point, other good locations include the Kessock Bridge and Fort George.  You can also have opportunities to see them at Burghead, Hopeman and Spey Bay. For those that wish to take to the waters in search of dolphins we particularly recommend Dolphin Spirit who run regular trips from Inverness Marina.

Red Squirrels used to be common across the UK. Unfortunately, they have suffered a significant decline due to various reasons. Of the estimated 160,000 Red Squirrels left in the UK, approximately 75% of them are to be found in Scotland.

Squirrels are fairly shy creatures so spotting them can be a challenge. However, if you know where to go and have the patience to sit and wait there is a good chance you will see them. John has a few tips on where to see these adorable creatures so just ask and he’ll gladly point you in the right direction.

When the UK became isolated from the rest of Europe over 9000 years ago, a population of European wildcats became separated from the rest of their species. Over the years that initial population of wildcats evolved into what we know today as the Scottish wildcat. At about twice the size of a domestic cat, they are the largest of the Wildcat family.

Scottish wildcats are unfortunately critically endangered. They are suffering from a variety of challenges including loss of habitat as well as interbreeding with domestic cats. It is thought that the population of purebred Scottish wildcats could be just a few hundred.

Scotland is home to both the Harbour Seal and the common Grey Seal.

The worldwide population of harbour seals is around 500,000 and about 24,000 of these can be found in Scottish waters.

Worldwide Grey seals number is around 400,00 with about 144,000 of living around the Scottish coast.

There are a number of good places to spot seals and once again John can point you in the right direction.

The Loch Ness Monster (or Nessie) is perhaps Scotland’s most elusive animal. Despite over 1,000 eye witness accounts, no compelling evidence exists to either confirm or deny that she is lurking in the murky waters of Loch Ness.

Of course, Loch Ness is pretty big at about 23 miles long by a mile wide. In places, it is over 750 feet deep, and it contains more water than all the lakes of England and Wales combined. So, there is plenty of space for Nessie to hide.

If you should catch a glimpse of Nessie, do make sure to get it recorded in the Official Loch Ness Monster Sightings Register.

And let’s not forget the Highlands’ favourite four-legged inhabitant – the Highland Cow! These Highland locals with their long horns and long, wavy coat are a favourite with visitors and you can say “Hello” to a “Heilan’ Coo” at many visitor hotspots such as Jacobite Cruises at Dochgarroch or Cameron’s Tearoom near Foyers. And if you’re not quite brave enough yet to take a selfie with a real Coo, look out for the new Highland Cow sculpture at Jacobite’s Dochgarroch departure point! We’d love to see your photos!

Find out more about our stunning Scottish Highland scenery and wildlife 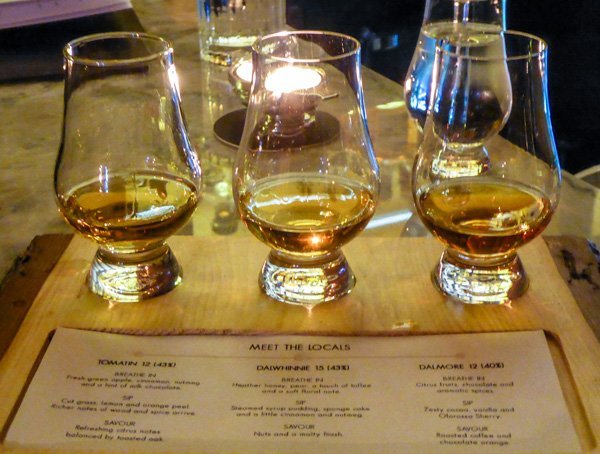